It lies nestled in the Cocora valley, flanked by mountains to the east and west. Indeed much of the city can be seen sprawling up the slopes of the mountains.

It is also commonly known as 'la ciudad de eternal primavera' (the city of eternal spring) with the temperature at a comfortable low to mid-twenties year round. 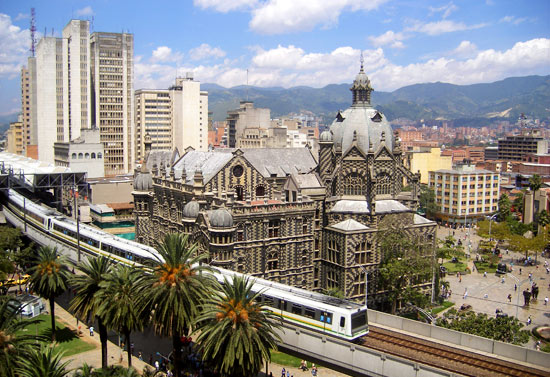 View of the city's Metro and Plaza Botero

Hotels
Guide to hotels in the city, from the cheapest hostels to the most luxurious boutique hotels.

Transport
Guide to getting to, around, and away from the city. Click here for a guide to Medellin airport Jose Maria Cordova.

Medellin's appeal lies mainly in its atmosphere, its nightlife and especially its people.

The people here are commonly known as paisas. The name also refers to people from the coffee region of Colombia although it is almost always associated with people from Medellin and its department Antioquia.

In addition to being among Colombia's friendliest people Paisas have also developed a reputation for being hardworking and entrepreneurial.

Although there aren't a huge number of tourist attractions within the city, the following are definitely worth checking out:﻿﻿

A great place to observe these talents first hand is at the famous Feria de Las Flores (The Flower Fair). Here you'll see 'Silleteros' (flower makers) walk for miles carrying their enormous flower presentations from their towns down to the city. This is a must-see if you're here in early August!

This is one of the city's most famous landmarks. Pueblito Paisa is a mock-up of a typical, colonial style Antioquian town complete with central plaza and surrounding shops and houses.

The view from the top of the hill on which it's located is worth a trip though. There is a viewing platform where you view the city's skyline and snap some photos. 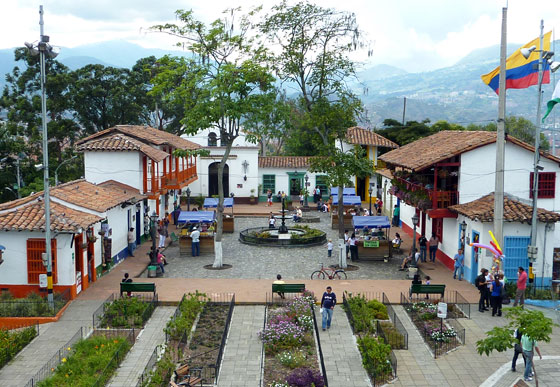 If you want a proper 'Paisa' town experience my advice is simple; visit a real one. See my Antioquia towns guide for info on the many beatiful places in this department situated between one and four hours from Medellin.

You'd probably expect this information be included in the 'Transport' section (above), but the city's Metro Cable is a tourist attraction in itself.

The first begins it's ascent at the Metro station 'Acevedo' on the Metro A line and climbs to the east passing stations Andalucía and Popular I before its final stop at Santo Domingo.

The route passes over some of the city's poorer and more colourful neighbourhoods and gives an impression of how the majority of people live in the city.

As so many hotels and hostels are located in the swanky south many tourists would probably leave Medellin without this impression if it weren't for the Metro Cable.

Another good reason to make the trip is for the view across the city that awaits you at the top of the line.

There is a smallish plaza down to the right of the Metro Cable station as you look out at the city from where you can get some decent photos on a clear day (for this reason it's generally best to go in the morning).

Just next to this plaza is the large, conspicuous library called Parque Biblioteca España. It was inaugurated in 2007 by the king of Spain whose country made considerable contributions to its construction. 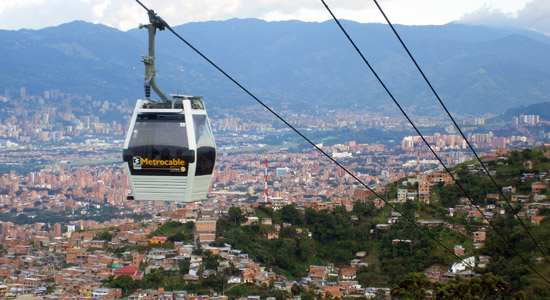 If you choose to wander around the neighbourhood of Santo Domingo, keep your wits about you.

The area around the Metro Cable station is well policed, but Santo Domingo remains one of the city's poorer neighbourhoods and there is still paramilitary activity here as well as general crime.

As always, the chances of something bad happening are pretty slim, but it's probably best to do any serious neighbourhood walking here with another Colombian, especially at night (and you might find convincing a lot of Colombians, especially from the south of the city, to go with you a bit difficult).

Spend enough time in Colombia, especially in Medellin, and you'll come across some peculiar paintings and sculptures by a Paisa artist named Fernando Botero.

He is Colombia's most famous artist, whose speciality is painting/sculpting his subjects (primarily people, fruit and horses) in a bloated, chubby style.

His works are ubiquitous around Medellin and can be found on the walls of restaurants, the sides of buildings, friends' houses and in plazas.

The plaza with the largest collection of his sculptures, and which is named after him, is Plaza Botero. 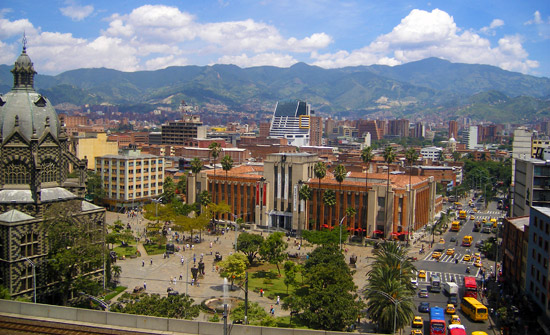 Located in downtown Medellin next to the Metro station Parque Berrio, Plaza Botero is a pleasant place to spend a few hours. As well as the sculptures there are some small grassy areas to relax in and the odd looking Palacio de la Cultura is definitely worth a photo or two. Also located on the plaza is the Museo de Antioquia (info below).

The city's most important museum, Museo de Antioquia' (photo above) is located in Plaza Botero on the opposite side to the Metro line.

It comprises 3 floors of works by various national and international artists. There are also regular exhibitions.

Until 2006 the botanical garden of Medellin was poorly maintained and infrequently visited. In 2007 it was transformed and has become a very popular place to escape from the hustle and bustle of the city.

Its centrepiece is the 'Orquideorama' an interesting architectural structure which houses a variety of orchids (Colombia's national flower) and other speicies of flowers.

The Botanical garden is a terrific place to come to relax, especially during the week when it is less crowded.

There are also frequent concerts, exhibitions and fairs held here.

If you're peckish, I'd recommend the excellent restaurant 'In Situ', in the middle of the gardens. Try their delicious fruit juices! 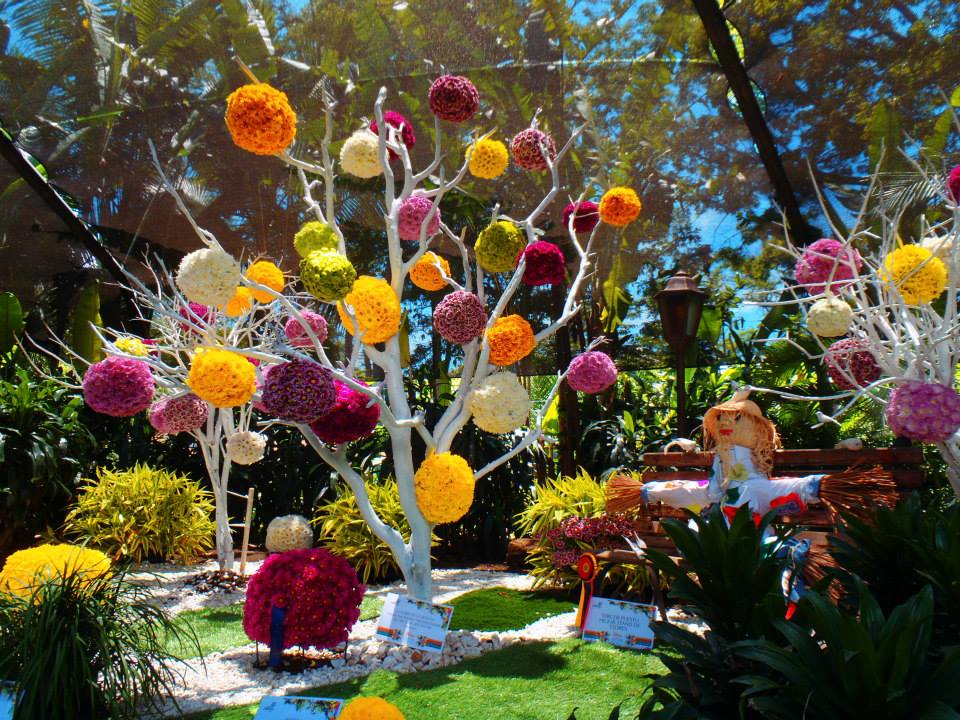 On the opposite side of the Metro line from Parque Explora and the Jardin Botanico is a paved 'park' very popular with families.

Kids seem to have a decent time there running through the fountains and playing in the sand area and there are various cafes offering refreshments.

There is also a decent planetarium here.

Medellin's answer to Bogota's 'Maloka' is this impressive science park.

It was inaugurated at the end of 2007 and remains incredibly popular, especially with families.

In the area outside the principal building are a variety of interactive hands-on science attractions which demonstrate various fundamentals of mechanics.

The building itself features numerous rooms containing all manner of interactive science displays and also a special 3D room.

Parque Explora's main attraction is the aquarium which is currently South America's largest. The aquarium displays an impressive range of aquatic life (although there are currently no sharks) and the guides are friendly and knowledgeable. 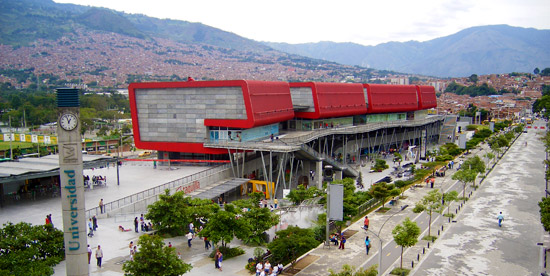