Choco Colombia is the only department (state) in Colombia which borders both the Pacific Ocean and Atlantic Ocean.

It is also officially one of the wettest places in the world! Barely a day goes by without at least one torrential downpour.

But seeing as it's average daytime temperature is around 31C, the rain is often very welcome!

Choco consists almost entirely of thick rainforest which is bordered by the Baudo Mountains which run along the Pacific coast and the Cordillera Occidental (Western Andes mountain range) to the east.

For about 6 months I flew into Quibdo, Choco every weekend from my home city of Medellin to teach at a university. I was always amazed at how suddenly the majestic mountains of Antioquia gave way to dense virgin rainforest.

In fact one of my ambitions remains to stand atop one of those mountains and stare across one of the world's wettest rainforests and out over the Pacific Ocean...

Through the jungle of Choco Colombia snake three main rivers; the San Juan, the Baudo, and the largest of the three, the Atrato.

A lot of place names in Choco Colombia end in 'do'. This suffix comes from a language indigenous to Choco and means 'river'. So any place ending in 'do' is likely to have a river running through it e.g. Quibdo.

The capital of Choco is Quibdo. It is smaller than many Colombian departmental capitals and is really a large town rather than a city.

While there may not be much in the way of entertainment in Quibdo, it is an interesting place to visit since it is culturally so distinct from the rest of the country.

Over 80% of the Choco population is Afro-Colombian. As a result, much of the language, food, music and traditions are markedly different from elsewhere in Colombia.

Choco, and Quibdo in particular, was a place I came to know quite well while I was working there. The people there strive to make foreigners (and other Colombians) welcome. I was frequently invited to eat or drink something by complete strangers. 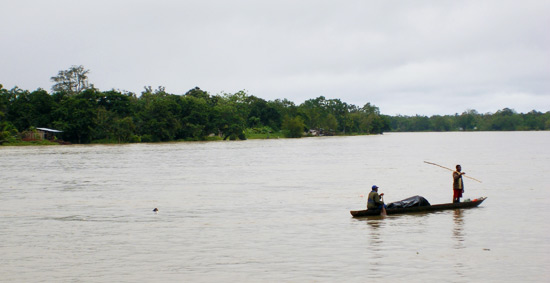 Fishing on the Atrato River

Sadly, Choco is one of the poorest departments of Colombia. The reason for this is probably a combination of neglect, corruption, geography, rascism and exploitation by business (in particularly mining companies).

Choco is a region rich in resources; mineral, plant and animal. If managed in a responsible and ethical way they could produce a lot of wealth for the region's inhabitants.

But due to greed and corruption from both external business and internal politics, the people of Choco sadly get to see relatively little of this money. 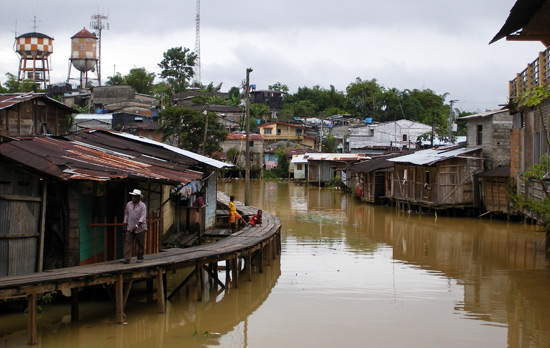 A neigbourhood in Quibdo bulit on stilts above the standing water

This is rightly one of the main attractions of Choco Colombia. Whereas tourists flock to the coastal resorts of the Caribbean, the beaches on the Pacific remain almost untouched.

The sands may be slightly less golden and the waters a tad cooler than their Caribbean counterparts, but trust me, the beaches here are still stunning!

Not only that, but the coastal waters offer a change to see some impressive marine life - including, from July to October, the mighty humpback whales!

Bahia Solano and Nuqui are the two main coastal towns from which to access the rest of the coastline and to organise diving trips etc.

My guide to Bahia Solano has more information on visiting this part of the Pacific coast.

Return from Choco Colombia to Homepage