Cartagena de Indias is arguably the most impressive colonial city in all of Latin America.

To take a walk through the streets of the old quarter of Cartagena Colombia is to step back to the time of the Spanish colonial period. 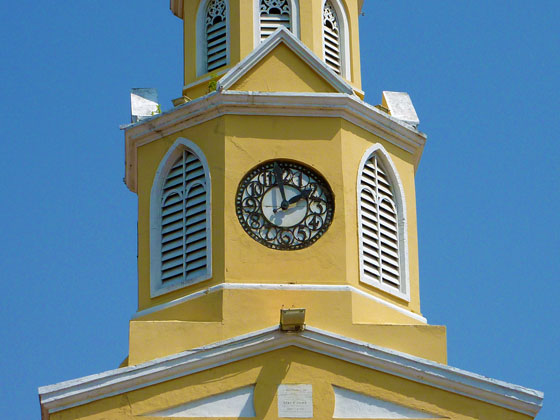 And all this is in addition to the beaches, San Felipe castle and the proximity of the stunning Islas Rosarios.

So brave the crowds (and, depending on your budget, the prices!) and spend a few days in one of Colombia's absolute must-see destinations.

Hotels
Guide to hotels in Cartagena Colombia, from the cheapest hostels to the most luxurious boutique hotels.

Nightlife
A comprehensive guide to the best bars and clubs in Cartagena Colombia for all tastes and budgets.

Sport
A guide to the city's attractive stadium Jaime Moron Leon refurbished for the Under 20 World Cup.

Weather
Info on the wet and dry seasons and precautions to take against the extreme heat as well as a 4 day weather forecast for Cartagena Colombia.

Photos
Galleries of photos of different areas of the city including the Colonial Quarter and Bocagrande.

Cartagena's main attraction is without doubt the old colonial quarter located to the north east of the city.

The colonial quarter forms an area of about 1 square kilometer and the majority of it is contained within a large stone wall built along the line of the coast and around along the edge of the bay.

The usual place to start a tour of the old city is at the Puerta del Reloj (Clocktower) which contains the main gate. 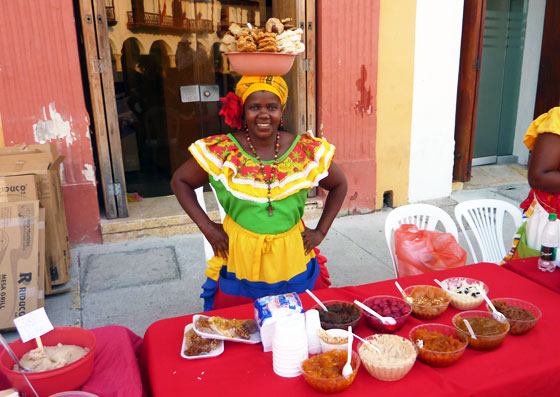 A traditional sweet seller in the Old City of Cartagena Colombia

After passing through the main gate you arrive at Plaza de los Coches, a busy place with sweet sellers, bars and restaurants.

This is also one of the spots where you're most likely to be approached by tour and bar reps. Most speak English and some can be quite persistant, but if you're not interested then a polite rebuff will generally be sufficient.

Once you pass through the narrow Plaza de los Coches the spaceopens up to form Plaza de la Aduana, the old city's largest plaza. Here you find banks with ATMs and several shops. 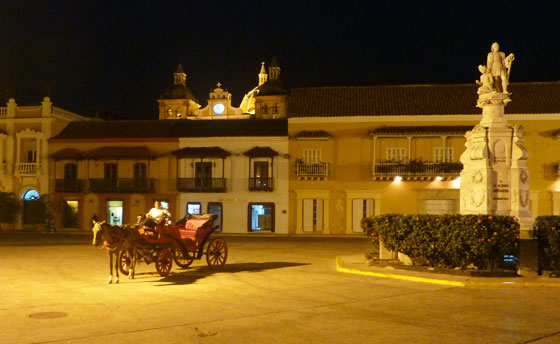 Walking along the left hand edge of the triangular plaza where the line of banks are located brings you to a shortish paved walkway leading to Plaza de San Pedro Claver.

On the left hand side just before reaching the Plaza is the Museo de Arte Moderno (Modern Art Museum) which contains two floors of interesting paintings and sculptures.

Outside the museum are a series of interesting metal sculptures depicting scenes of everyday life. 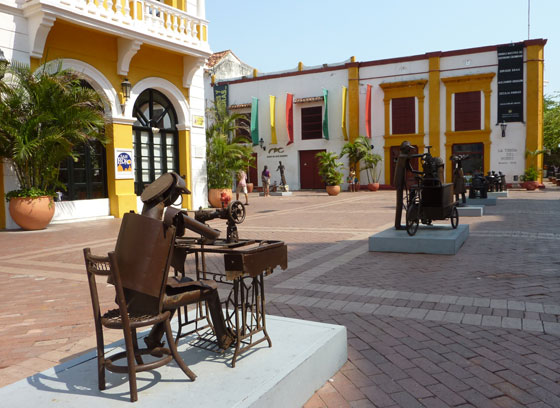 Walking right (as you face Iglesia de San Pedro Claver) up Claver Ladrinal street for two blocks takes you to the centrepiece of the old city, Plaza de Bolivar.

This small plaza/park offers some welcome shelter from the sizzling Caribbean sun and is surrounded on all sides by delightful colonial architecture. 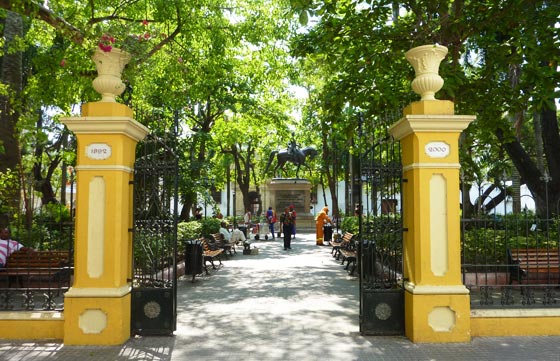 Three of the buildings which border the plaza are particularly significant. On one corner lies the Cathedral with its large distinctive dome visible from all over Cartagena.

On the eastern side of the plaza is the Palace of the Inquisition which now takes the form of a museum dedicated to the instruments of torture used during the inquisition as well as other objects from the colonial and pre-Columbian periods.

The Gold Museum (El Museo del Oro) can be found on the Calle de la Inquisicion side of the plaza. The museum contains displays from Indians who inhabited the region before the arrival of the Spaniards. 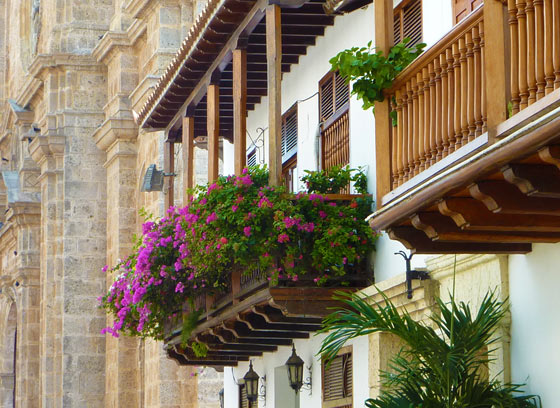 Plaza de Santo Domingo is a great spot for outside dining. As with most restaurants in the old city the food is good and the prices are high. But this is a really good bet for an evening bite to eat and/or drink, if the budget stretches.

If you continue straight up Calle Santo Domingo (which becomes Calle de la Factoria), you'll arrive at the large stone city wall which forms the edge of Centro. You can mount the wall and walk along the top in either direction. 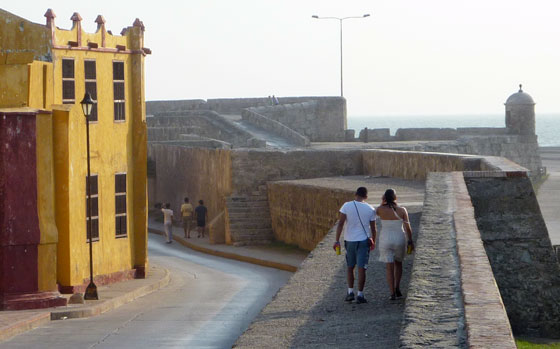 At times the wall gets quite narrow so take care, especially on a windy day!

If you walk to the left a block down you'll be treated to a colourful view along Calle Don Sancho right down to Plaza de Bolivar and the towering Cathedral.

There is also a small plaza where the Heredia Theatre sits. 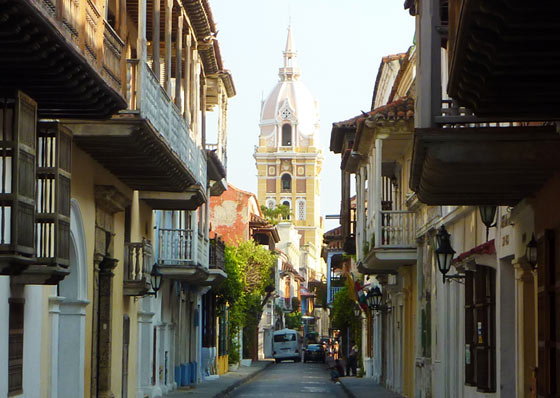 View along Calle Don Sancho towards the cathedral

Continuing along the wall for another five blocks or so brings you to the northeastern corner of the old city.

Here the walls thicken and contain 23 dungeons (known as Las Bovedas) which were used as storage and later as a prison.

They have now been turned into tourist shops. The souvenirs tend to be reasonably priced, at least compared to the rip-off merchants which wander the beaches and streets of Cartagena.

Outside the shops people sell paintings of the old city. Wander up and down and get a few quotes before you agree the price. Most are willing to barter a bit. 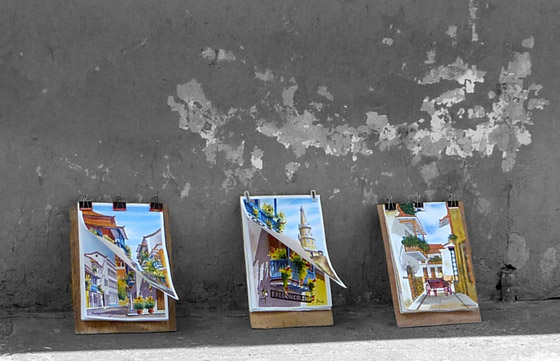 Situated about a 10 minute walk to the east of the Old City across Laguna de San Lazaro, Castillo San Felipe is one of Cartagena's top tourist attractions.

It was constructed in the middle of the 17th century and includes a series of tunnels, many of which are open to visitors. There are great views from the top of castle over the bay to Bocagrande and Laguito.

Entrance to the castle is currently $16,000. You buy the ticket at the ticket office at the entrance and then present it halfway up. A small shop at the top of the castle sells refreshments and souvenirs. 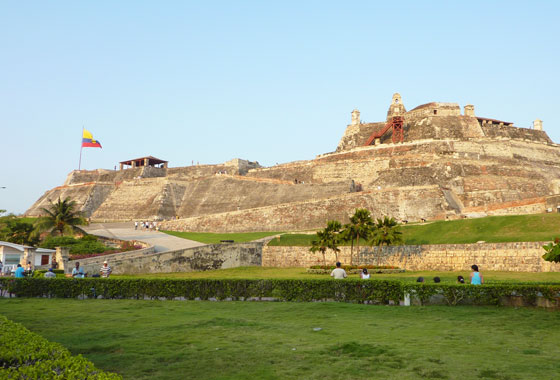 Sitting atop a 150m high hill is La Popa Monastery. The monastery, whose official name is Convento de Nuestro Señora de la Candelaria, was founded in 1607 by the Augustine fathers.

There is a small chapel and pleasant courtyard inside the Monastery as well as a small shop that sells souvenirs.

The Monastery affords the best views of the city of Cartagena. As well as the marvelous view over the harbour area there is also a viewing platform which allows you to observe the east of the city where the majority of the population resides. 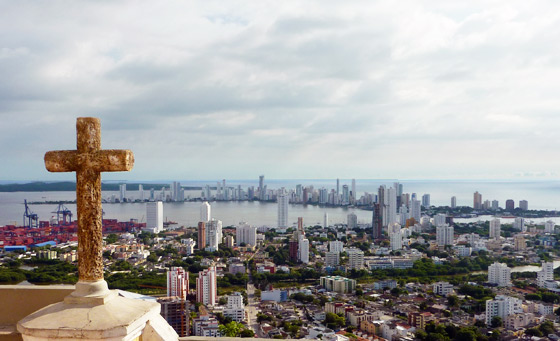 From over Cartagena from La Popa Monastery

The best way to get to La Popa Monastery is to take a taxi. From the historic centre a taxi driver will typically charge around 25,000 pesos there and back with about a 20-minute or so wait for you to have a look around.

While it is possible to walk up the hill to the Monastery it is generaly not recommended as the road weaves through a poor neighbourhood where robberies are fairly frequent.

Bocagrande is an upmarket sector of Cartagena Colombia which consists of a strip of land about 4 blocks wide between the sea and the Bay of Cartagena.

The city's most popular beaches are found in Bocagrande although they are not a patch on other beaches in the region, most notably those in the Islas Rosarios. 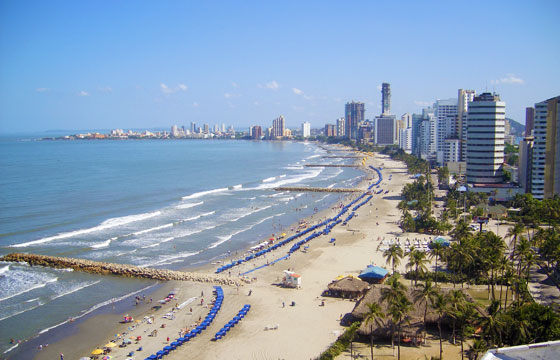 View along Bocagrande Beach with the Colonial Quarter in the distance

Carrera 2 (also called Avenida San Martin) is the main street which runs along the length of Bocagrande.

This strip contains a large number of hotels, restaurants, casinos and shops. Some restaurants are quite upmarket, but you can also find many cheaper eateries.

Bocagrande is also a good sector in which to get your hands on some souvenirs, sold both in shops and more informally on the street. 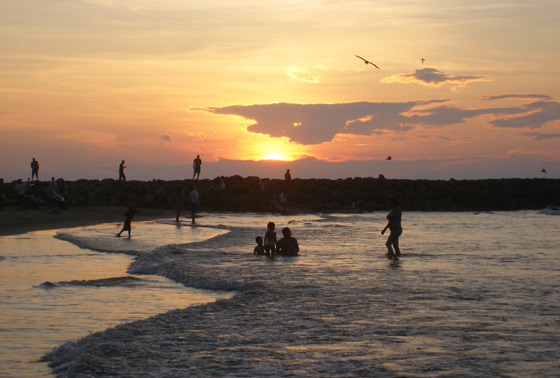 On the opposite side of Bocagrande from the beach is a pleasant walkway along the edge of the bay. It is popular with walkers, cyclists and skaters particularly in the evening.

The land bends round at a right angle and juts out into the bay forming a natural entrance to the bay.

The thin strip of land is called Castillogrande and is lined by a number of luxury hotels and apartment blocks.

Return from Cartagena Colombia to Homepage