The typical Colombian food varies greatly between regions. On the Caribbean and Pacific coasts the majority of dishes contain, unsurprisingly, fish often accompanied by delicious cocunut rice. In the interior of the country, in particular the Andean regions, beef and chicken dominate. 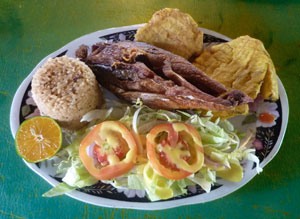 Colombians generally rise early and eat a fairly large breakfast. Many people eat a combination of eggs, bread, arepa and cheese with either juice or coffee for their breakfast.

Lunch is the most important meal of the day in Colombia. So much so that many Colombians (especially women) will barely eat anything at night.

The typical lunch (known as "El Tipico") varied between regions, but tends to contain either beef, pork or chicken, white rice, potatoes and a salad or vegetables. Lunch is usually served with a fruit juice.

Colombian food also includes many different kinds of soup. These can form a pre-cursor to the main meal, but are often the main meal itself as in the case or Ajiaco, Sancocho and Mondongo.

In the evening Colombians tend to eat a snack or something light, partly due to the fact that most people here go to bed early.

The following is a list of some of the most typical dishes found in Colombia along with my personal rating.

A soup traditionally from Bogota containing shredded chicken, potato, a corn on the cob, capers, cream and a herb called guasca. It is usually served with a side dish of rice, avocado and a salad.

The Colombian (or Antioquian to be more precise) version of a full English breakfast. For lunch. Served on a large plate a Bandeja Paisa includes rice, a friend egg or two, beans, ground beef, chicharron (a large pork scratching), chorizo (sausage) and a token salad so that it isn't pure protein and grease!

Be warned, they come large (I don't think I've ever managed to completely finish one of these off.) The chicharron is definitely worth a try.

Tamales are very typical in the central region of Colombia, in particular in the department of Tolima. They consist of a corn dough wrapped in a plantain leaf and boiled. Tamales are often filled with meat such as chicken or pork, and vegetables like carrots or corn.

Return from Colombian Food to Homepage