The country's third biggest city is the Salsa capital of Colombia - the place is full of music, rhythm and dancefloors!

Cali sometimes strikes me as a coastal city that somehow got seperated from the ocean. It has a lot of the same energy, heat, colour and racial mix of say Cartagena or Barranquilla﻿, but with mountains instead of sandy beaches.

Guides in this Section

Hotels
Guide to hotels in Cali Colombia, from the cheapest hostels to the most luxurious boutique hotels.

Nightlife
Guide to the lively Caleño nightlife. Info on the best bars and nightclubs in the "Salsa Capital of the World!"

While Cali is not a city overflowing with tourist attractions, there is definitely enough to keep you interested for a couple of days.

A good place to start a walking tour of Cali's city centre is Avenida Sexta (around which many hotels are located).

Not far from Av. Sexta is a park known as El Centenario through which runs a broad walkway called Paseo Bolívar. At the end of the walkway you cross over Cali River. It is from here that you'll get your first glimse of the distinctive Iglesia Ermita, a neo-gothic church that's well worth a look around. 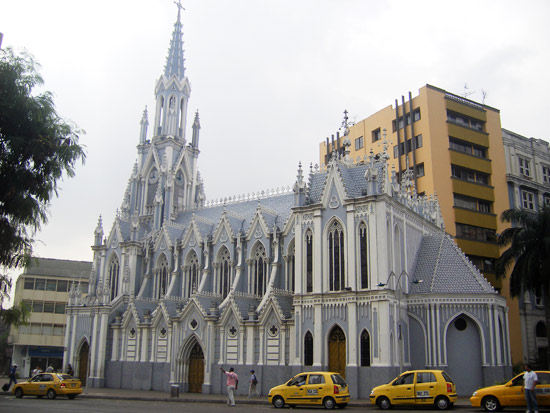 A couple of blocks from Iglesia Ermita is Plaza Caycedo, Cali's central plaza. The plaza is known for its impressively tall palm trees that reach higher than many of the buildings!

In the middle of the plaza's tall palms is a statue of independence leader Joaquín de Caycedo y Cuero. Around the plaza you'll find the Palacio Nacional and Catedral San Pedro. 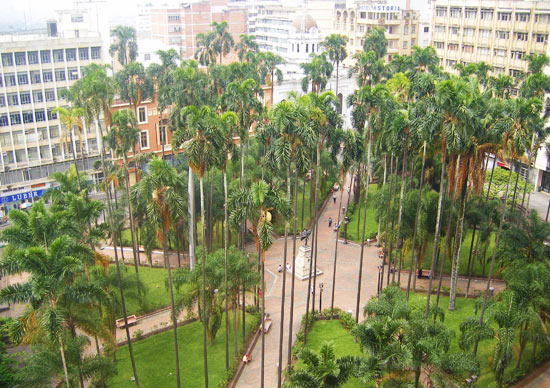 About 10 minutes walk from Plaza Caycedo is an attractive colonial neighbourhood called San Antonio. At its far end on a small hill is San Antonio Church.

This is a great spot to relax in the shade and look out over the city.

There are two lookout points on the ridge of the mountains which flank the city to the north and west.

The first, called El Monumento Las Tres Cruces is situated at 1,450m. To start the climb head to the intersection of Avenida 9AN with Calle 12D and follow the trail up.

Initially you walk along a stony road. Keep an eye out for the path that leads upwards into the woods after about ten minutes. If you do happen to miss it (as I did!) you'll come to a dead end a minute further along and will have to turn back anyway.

At a reasonable pace it's do-able in about 45 minutes. The final part involves walking up some rocks which can get slippery after rain so bring some decent footwear. Three large crosses decorate the peak. 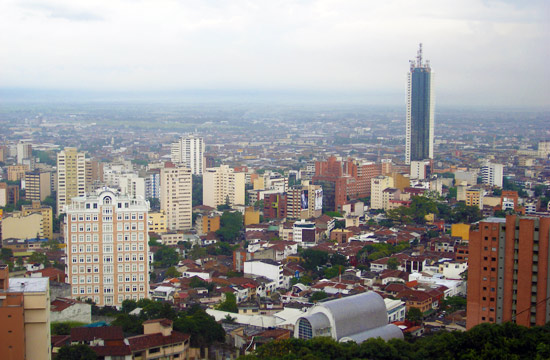 The other lookout point to the west near San Antonio is Monumento Cristo Rey, at 1,470m, and has at its peak a huge statue of Christ.

Another great vantange point is from atop the 45 story Torre de Cali on Avenida de Las Americas in the north of the city.

I'm not really a 'zoo person', but I must admit I was pretty impressed by this zoo. It covers 10 hectares and has quite a good range of animal enclosures.

Other Places of Interest in Cali Region

To the north of Cali is the town of Buga. It is well known for its magnificent Basílica del Señor de los Milagros, a huge pink cathedral to which people make religious pilgrimages.

4 hours west of Cali lies Colombia's most important port, and largest city on the Pacific coast, Buenaventura. While there isn't much to do in the city itself, it does provide the junping off point to get to the Juanchaco and Ladrilleros whose gorgeous beaches are most definitely worth a visit.

Return from Cali Colombia to Homepage