This is a question I'm constantly asked whenever I return to Europe and mention where I'm living.

My casual response to this question is along the lines of; "Well, they're really friendly and outgoing." And while this may be true, it barely scratches the surface when it comes to defining Colombians.

Defining a people is, at any rate, a near impossible task. The tired old stereotypes of; the British are reserved, Germans are efficient, Americans are loud etc, may contain an element of truth, but should be taken with a large pinch of salt.

Nevertheless, I assume you're reading this because you'd like at least some idea of what to expect from Colombians, both in terms of physical look and personality. So, here goes...

Modern Colombia is a melting pot of different races and ethnicities.

There are still significant numbers of the indigenous tribes that populated Colombia for centuries before the colonisers arrived.

With the arrival and eventual settling of the Spanish the landscape began to change. Children born to Spanish parents in what was then called Nueva Granada were known as Criollos.

But many people of Spanish origin began to inter-marry with the indigenous population. Their off-spring became known as Mestizos.

There had been an African presence in Colombia from as early as the 8th century, mainly Moorish Muslims from North Africa. By the early 16th century the Spanish began shipping over Africans to work as slaves as the native indigenous population started to decline.

Gradually the Afro-Colombian population began to inter-marry with the Spanish. The resultant children were called Mulatos.

Naturally there were also offspring produced from Indigenous-African relationships. These offspring were knwon as Zambos

Add to this immigration from the Middle East and Asia, particularly to Colombia's Caribbean coast, and you can see that the racial panorama of 21st century Colombia is a blend of almost every colour and creed imaginable.

The majority of Colombians are short compared to Europeans and North Americans.

Obesity is much less common here than in most parts of Europe or North America. Diet and lifestyle may account for this in part, but I'm often amazed that even the laziest people I know, coupled with a poor diet, are almost all slim.

Nevertheless, the following generalisations (yes, they are, of course, generalisations) are based on general observations I've made over the course of several years living here.

My ealier answer of "They're friendly and outgoing" is a good place to start. Almost every foreigner I've spoken to in Colombia has remarked at how open and friendly the people here are.

The Bogota people get a hard rap from much of the rest of the country for being "cold" and "rude". As with any capital city the size of Bogota people are less likely to randomly start a conversation with you on a bus, but you'll find that if you make the effort Bogotanos (or Rolos) can be just as friendly as their provincial counterparts.

As a foreigner you will find that Colombian people go to great lengths to make sure you are happy and comfortable in their country.

This may manifest itself as an invitation to drink or eat with them (even though you've only just met them). On asking someone in the street for directions it's not uncommon that they'll take you there themselves. And I still get people telling me "Thank you for visiting Colombia" or "Welcome to Colombia!" (despite the fact I just told them I've been living here for 7 years!)

This effort to please can occasionally be a problem. At various times I've asked someone for directions and it's obvious from their body language that they don't know where the place is. But instead of politely answering "No se" they have taken a guess at both direction and walking time and have sent me on my way in completely the wrong direction.

Rather than a criticism though, I think this goes to show the desire in the Colombian people to be helpful and pleasant at all times. Just take this into account when asking for information or directions!

Most Colombian people would freely admit that punctuality is not one of their strong points. But I also know many Colombians who despise this aspect of their culture. Just be prepared to wait patiently from time to time, for both social and business arrangements.

Colombia is a very regional country and the people of most regions have some stereotype or another (some positive, mostly negative!) Here are a few of the most common:

-  Rolos (from Bogota) - studious, but cold and rude

-  Pastusos (from Pasto) - Dumb (there are lots of jokes about Pastusos), but even most Colombians recognise it is more because of the accent than that they really are dumb.

-  Santandereanos - (from Bucaramanga and Santander) - angry, fierce (again, due more to the accent than a personality trait)

Once again, these are just stereotypes, but they are mentioned all the time by Colombian people. Make up your own mind! 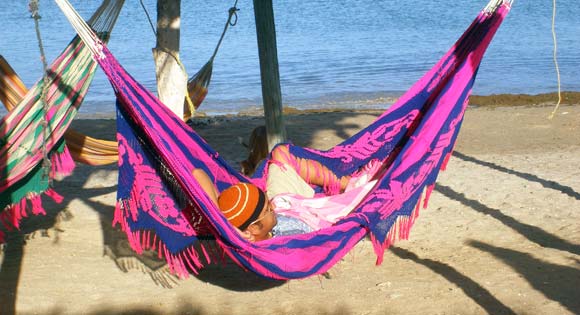 Coastal people are often stereotyped as being lazy

Return from Colombian People to Homepage