Describing the Colombia weather is actually quite a difficult task.

A country such as Colombia that possesses such a wide range of terrain including coasts on two oceans, mountain ranges, plains, deserts, paramos and huge stretches of jungle is bound to also have an incredibly varied climate.

But even within these distinct geographical regions of Colombia can be found many micro-climates. There are, as a result, areas of Colombia with high rainfall situated relatively close to dry, arid areas.

The fact that the Colombia weather is so varied is part of what makes the country so fascinating. That you can be on a tropical beach one day and then climbing a snow-capped mountain the next is quite remarkable.

The climate of Colombia can be more or less divided into 5 principal zones.

The Atlantic (or Caribbean) coast of Colombia is hot and humid most of the year. Temperatures hover around 30C although December and January can be a little cooler.

The rainy seasons tend to be between April and May, and October and November. Expect heavy downpours in the afternoons.

The Pacific coast of Colombia is just a hot as the Atlantic, but is much wetter. The jungle in the department of Choco which meets the Pacific Ocean is among the wettest in the world.

The dry season is from December to March, but even during these months heavy downpours can occur.

The vast majority of Colombia's inland cities are located at varying altitudes on the Andean mountain ranges, principally the Cordillera Oriental and the Cordillera Occidental.

The climate in these cities depends almost entirely on the altitude at which they lie.

Cali, which sits at an altitude of 1000m maintains a warm, at times sticky climate.

Medellin lies 500m higher than Cali at an altitude of 1500m and enjoys a year-round spring-like climate (it is known as the "City of Eternal Spring"). Click here for a guide to Medellin weather.

Bogota lies way up the Cordillera Oriental at 2600m and possesses a much cooler climate. Bogota can, on occasion, experience hailstorms. The largest ever recorded in the Colombia capital occured in 2007, blanketing the city and causing enormous chaos. The scenes looked reminicent of a Siberian town being hit by a blizzard! 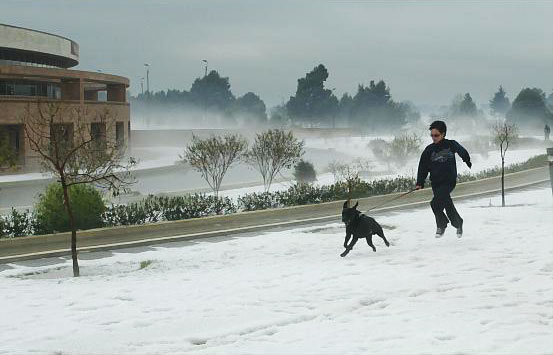 Flooding is becoming an increasing problem in the country. In recent years, the wet seasons have brought enormous rainfalls resulting in widespread flooding.

As well as roads being flooded, the rains cause landslides which severely restrict access between towns and cities in the country. 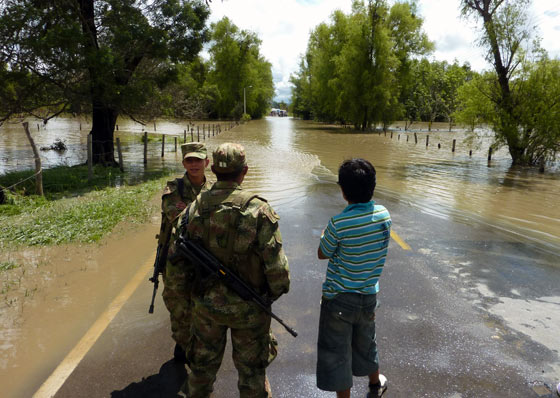 Many (although not all) of Colombia's highest mountain peaks are found along these two principal spines of the country. They include Nevado del Ruiz, Nevado del Tolima and Nevado del Huila all of which possess snowy peaks with temperatures around freezing.

The Eastern Plains (Los Llanos Orientales) of Colombia cover a vast area of land which continues into western Venezuela.

Most of the region lies at an altitude of no more than a few hundred meters above sea level and, without coastal breezes, the weather here is almost always dry and hot.

That said, the rivers that permeate the region are fed by the rains that fall in the nearby Andes and so much of Los Llanos is lush and fertile.

The southern Amazon region of Colombia is, unsurprisingly, hot, humid and wet.

The dry season is between January and March during which time a spectacular array of colourful flowers can be seen. The rest of the year the is wet with heavy downpours frequent.

Return from Colombia Weather to Homepage