For the most part the Medellin weather is fantastic. The city is even known as 'The city of Eternal Spring' (La Ciudad de eterna primavera) as the mountain city basks in year round sunshine and temperatures in the mid-20Cs.

Even during the wetter periods of the year (usually from March to June and Spetember to November) the mornings tend to be rain free and can in fact be very sunny. 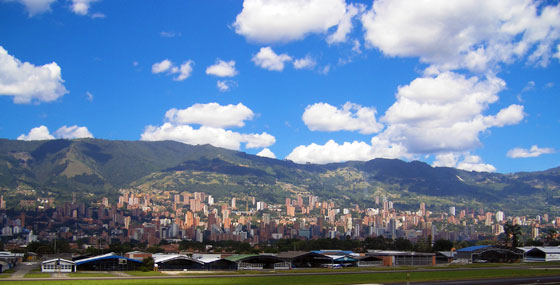 During the wet seasons dark rain clouds tend to build up to the south of the city and sweep north through the Aburra Valley with often torrential rainfall the result.

The weather in Medellin can typically be quite localised. It is not uncommon to see dark clouds building in the distance only for them to completely bypass large areas of the city. Often the downtown area of Medellin experience a deluge whereas the western neighbourhoods receive not a drop.

Storms can sometimes hit the city and, although usually fairly short-lived, can cause serious flash flooding. As the city is located in a valley, the worst flooding tends to occur in the lower, western sector of the city.

Despite hazardous conditions during downpours, drivers often don't slow down all that much and being on the roads can be more dangerous than at other times.

During the wet season, Medellin and Antioquia can experience significant landslides. Terrible tragedies have occured with whole areas of houses being swept away.

It also makes travelling between cities tricky. It's not uncommon during the wet season that one or more of the routes to the Jose Maria Cordova airport at Rio Negro are blocked.

If you're planning to travel during the wet season, consider flying, or at least be aware that journey times may be dramatically increased.

The normally fine Medellin climate means that short-sleeved shirts can be worn year-round. It's worth noting, however, that this warm spring-like weather relates to the city of Medellin and that as you climb to higher altitudes outside the city the temperature can drop considerably, especially at night.

Sunscreen isn't a necessity in Medellin, but you might want to slap a bit on if you're out for several hours, particularly between 11am-3pm.

Return from Medellin weather to Homepage