The long thin “chalupa” boat sliced through the Magdalena River as its propellers spewed up brown murky water.

Sat at the rear of the boat I tried to work out if the right-hand curve up ahead would bring the already perilously close muddy water flying into my face.

As it happened the only moisture on my person as the chalupa docked at the tiny town of Bodega was the copious amount of sweat that the intense afternoon heat had drawn from my body.

About a dozen of the locals swarmed around the boat as the passengers disembarked offering taxi and motorcycle transportation. There was no need to mention the name of the destination as there was only one place to go on this large island trapped between two branches of Colombia’s largest river.

It would be about an hour along a bumpy road to the small town of Mompox (also known as Mompos).

Despite sounding like a terrible disease of a bygone age, Mompox is actually a charming colonial town on the bank of a branch of the Magdalena River. Founded way back in 1537 as a port from which to transport goods into the interior of the country, Mompox quickly flourished. 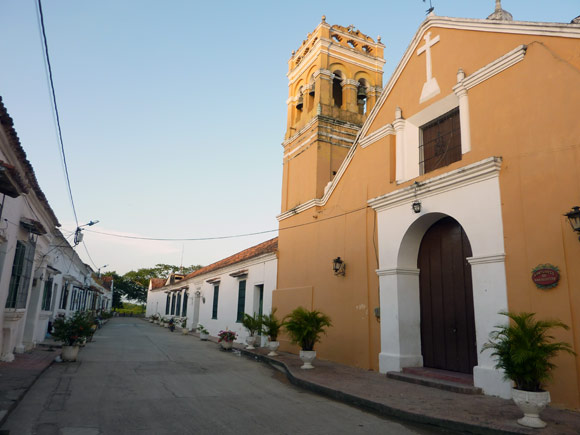 Gradually over the years the river has deposited silt along the Mompox arm of the Magdalena river and the river has shifted its course to the west. Unable to pass along the Mompox branch boats began to change route passing by Magangue on the Chicagua branch of the river. As a result, Mompox’s importance as a trading port dwindled.

The Mompox I observed on arrival was of a quiet, sleepy town. It was in this modern mellow version of the town in which Gabriel Garcia Marquez famously set his novel “Chronicle of a Death Foretold”.

Whereas centuries past Mompos had been one of the country’s most important trade hubs, nowadays its residents make their crust selling snacks and cell phone minutes on street corners.

There are also signs that tourism, while still very much in its infancy, is becoming an increasingly important source of employment.

Mompos even has a backpacker hostel. La Casa Amarilla, opened in 2008 by Britisher Richard McColl, attracts a steady trickle of travellers into its colonial quarters. As well as running La Casa Amarilla, Richard also dedicates himself to working as a travel guide and journalist. Needless to say, there is no shortage of information and advice at this hostel. 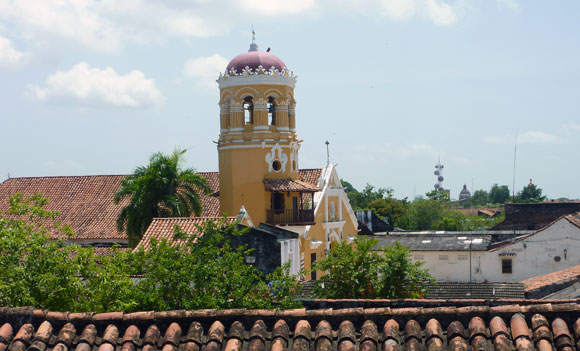 However, despite the slight increase in tourism, the relatively awkward access to Mompox is likely to keep the majority of travellers away, which will probably please the small number of travellers who do find their way here. After all, it’s a little harder to imagine stepping into a Gabriel Garcia Marquez novel whilst surrounded by large groups of Aussie or Israeli backpackers.

So after ten minutes cooling off in my air-conditioned room in La Casa Amarilla I step out onto the sun-bleached streets of Mompox.

Much of Mompox could just as easily be a number of Colombian colonial towns. What sets it apart from the likes of Barichara and Santa Fe de Antioquia is its location. And the heat. 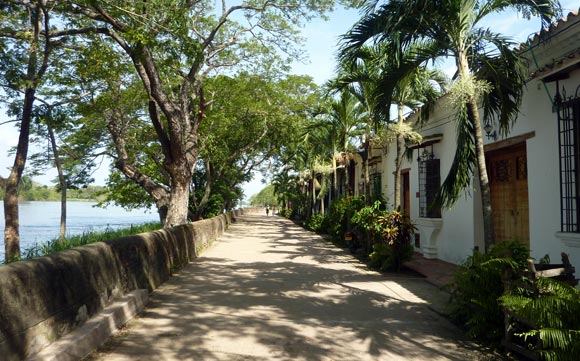 As I stroll around the back streets I’m struck by how deserted they are. It’s Tuesday afternoon and even on the town’s main roads there is barely a person or vehicle to be seen.

The colonial quarter of Mompos, roughly a rectangle 10 blocks by 2 blocks running along the river, can easily be covered in an hour, but many of the buildings and plazas are so charming that you can’t help but stop and nosey around for a while.

The night brings a little relief from the heat, but not much. I take an evening wander down to Plaza de Santo Domingo for a bite to eat. I approach one of the fast food carts parked on the small, but busy plaza and order a hot dog. “Easy on the sauce” I say. Colombian Hot Dogs tend to be drowned in a rainbow of sauces from pineapple to mustard, barbeque to ketchup.

The typical “Usted es Gringo?” gets a bit tiresome, so I’m always pleasantly surprised when someone makes a guess at a nationality, and the more obscure the better.

“Ahh. Manchester United!” And we discuss football for the few minutes it takes to cook and then adorn my Hot Dog with the usual paraphernalia (onions, small potato chips, lettuce, tomato and then the sauces).

After finishing my hot dog I pop across the street to call a friend back in Medellin on one of the public cell phones they have in most small shops in Colombia. I try twice, but there’s no answer. I hand the phone back and thank the shopkeeper. He motions for me to wait and dials the number himself. No answer. I say “Thanks, It’s OK” and start walking off. “Espera!” (Wait!) implores the shopkeeper and redials. I repeat my thanks and wander off. Even after a block or two I’m half expecting the shopkeeper to run down the street screaming “Come back! He’s answered!!”

I stroll back to the hostel along the riverside passing youngsters stealing kisses in the balmy gloom under the overhanging trees.

The following day I organise a trip into the nearby swamps for the afternoon. I take another walk through the town. I’m stopped by a young man who tells me to wait for a few seconds while he rushes off to get his cousin – “ the most knowledgeable guide in Mompos”.

When he arrives, his cousin makes his pitch and including a claim to know the story behind every one of the doors in the town. Impressive stuff, but I politely decline for the time being taking his number just in case. 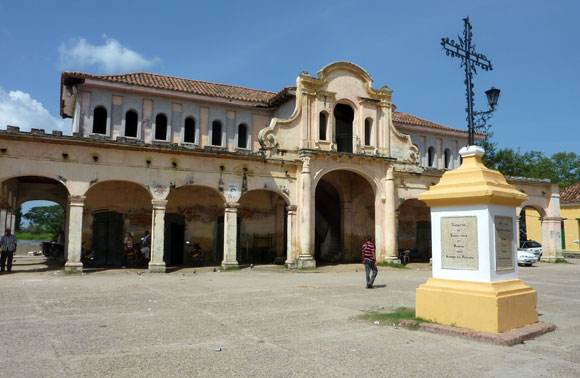 After lunching on a delicious Bocachico fish served with coconut rice and patacones (thick fried plantain pancakes is probably the best way to describe them), I head back to the hostel for my tour rendezvous. As I’m crossing the Plaza de la Inmaculada Concepcion a young chap rushes over to me. “Are you going on the boat tour?” he asks.

He tells me his name is Jose and that he’s on his way to collect a Colombian couple who are also coming. He says we are certain of seeing Iguanas, monkeys and literally thousands of birds! “No birds, no money!” he confidently states.

On the tour Jose regales us with stories of Mompox’s colourful history. Barely have we left the town when he spots a huge iguana lying restfully on the riverbank. As we swing round to get a closer look we scramble for our cameras in fear that this may be the only iguana we see on the trip. We needn’t have worried. During the three and half hours of the tour we must have seen about 50 of the creatures. 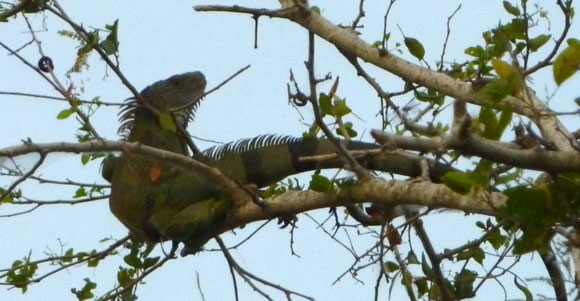 Slightly downstream we turn off the Magdalena River and into a small narrow tributary. At various points we are forced to bash our way through thick plants growing on the surface of the wetlands.

In between warning us of sharp branches crashing through the boat, Jose spots an eagle and a howler monkey in the distance. He claps and shouts in an attempt to force the animals into revealing themselves, a technique which actually seems to work quite well, as the eagle launches itself up into the air in full view.

We visit a couple of islands in the middle of the swamps. On the first small island, perhaps just a few hundred square meters, is a single house where I’m told two families live. We take a look around and I’m treated to the most delicious mango I have ever eaten. The fruit was bright orange and had the consistency of a slush puppy. I practically suck the flesh of the seed with the sweet juice oozing down my chin. 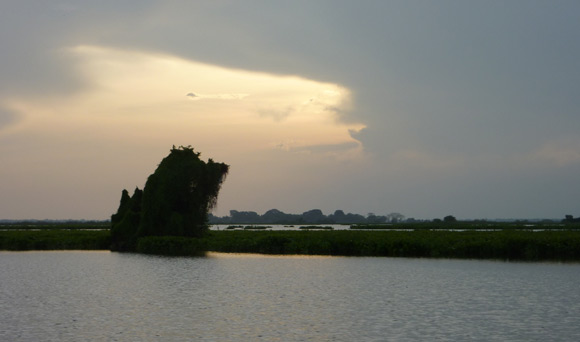 View of swamps near Mompox

This island is bigger than the previous one. And it is here that we get a good look at some howler monkeys. Jose cautiously moves around a tree, his head cocked upwards, his eyes roaming. He stops. “There!” he whispers. We look, none of us see anything. Jose launches a few stones up into the tree and as the poor monkeys flee to safety we spot them, at least four or five. Through the zoom in my camera I see one of the monkeys peering back down at us, perhaps wondering when the next bombardment of stones would begin.

As we set off back towards Mompox the sun begins to set, giving the sky a spectacular orange glow and casting long shadows across the swamp. “It’s going to rain tonight,” proclaims Jose.

By now the iguanas have moved high up into the trees where they sleep making them more visible. We also pass a tree with about 7 howler monkeys perched atop a large bare branch.

Then the birds start to appear. Hundreds of yellow and black birds flutter around and more follow as Jose once again begins clapping his hands loudly.

We force our way back onto the Magdalena River and Mompox comes into view in the distance as the sky continues to turn a darker orange. 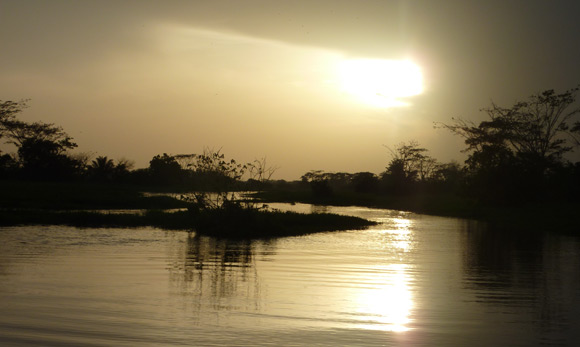 Spectacular sunset over swamp near Mompox

After a saying “Chao” to Jose and the Captain I walk up to the third floor terrace in the Casa Amarilla to enjoy the final stages of the sun’s colourful descent below the horizon. With the sky bathed in vibrant reds and oranges a Frenchman staying at the hostel pokes his head through the door, takes one look at the sky and mystifyingly says “Looks like I’m too late,” and then heads back downstairs.

That night, as I watch a DVD on the hostel TV, it begins to rain heavily (some impressive meteorological predicting by Jose!). By the time I wander through the courtyard to my room the sky is a constant flickering of white light. I don’t think I’ve ever seen anything quite like it before. There are probably at least 5 flashes a second. I stare up at this remarkable celestial lightshow for several minutes before retiring to bed.

The following morning I bid farewell to La Casa Amarilla and Mompox. I was on my way to the coastal city of Santa Marta, a trip that would take approximately 7 hours.

I took a motorbike taxi to the small town of Santa Ana. At two stages along the road youngsters held a rope across the width of the street and asked for a contribution from the passing drivers. It seemed from what I could tell that the contribution was for helping to clear the road after the heavy rains of the last few weeks, although I wasn’t sure.

To reach Santa Ana, the departure point for buses to Santa Marta, I had to take a short ferry ride across the river. A couple of young lads pushed the boat out into the deeper waters of the river before the motors were started and I was carried across to the other side of the Magdalena River for the final time.

About an hour so before reaching Santa Marta I saw signposts for Aracataca, birthplace of Gabriel Garcia Marquez, and supposedly the inspiration for another of his famous novels “One Hundred Years of Solitude”.

I’ve never been to Aracataca, but I struggle to believe it could be as magical a place as Mompox.

For more photos see my Gallery of Photos of Mompox.

Return from Mompox to Homepage