The Colombia flag is a tricolor of yellow, blue and red. The yellow part of the tricolor occupies the top half of the flag followed by blue and red strips which each take up a quarter.

SImilar to most common national flags, the dimensions of the Colombian flag are of the ratio 2:3.

It is generally accepted that the yellow colour represents the gold found in Colombia, the blue signifies the waters of Colombia's oceans and the red symbolises the blood spilled by Colombians in order to secure its independence.

Francisco de Miranda is the person credited with creating the flag as it is today. He designed the flag in the late 18th Century, but was not officially adopted until 26 November 1861. 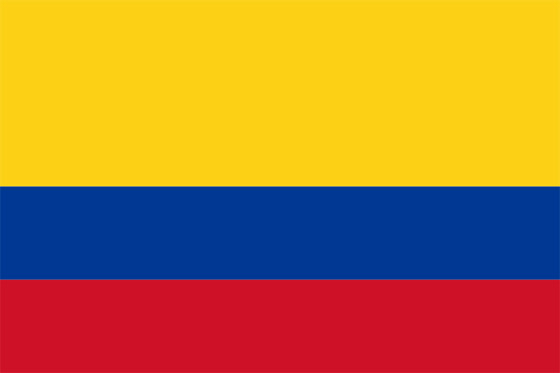 Two other countries formed from the break-up of Gran Colombia (Ecuador and Venezuela) also have flags with similar colours and designs.

In fact, the only difference between the Colombian and Ecuadorian flag is that the Ecuadorian vesrsion features a coat of arms in the centre.

Venezuela's flag differs from Colomba's (and Ecuador's) flag in that the yellow, blue and red strips are of equal length on the Venezuelan version.

Official use of the flag is governed by regulations which include the following:

7 August is the country's official flag day, commemorating the Battle of Boyaca on this date in 1819 which was the crucial battle in sealing Colombia's independence from the Spanish.

Walk around any city, town or village and you will see huge numbers of flags being flown from buildings along every street. 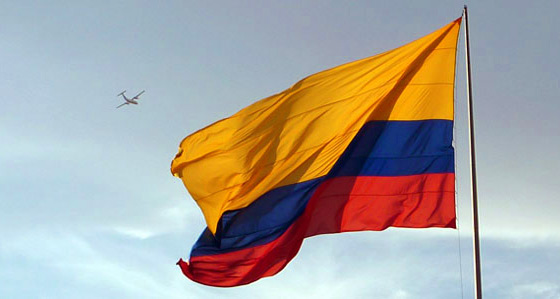 In addition to the national flag each department in Colombia has its own flag.

The flag of Bogota D.C. consists of an upper half of yellow with the lower half red.

The flag of the department of Antioquia, of which Medellin is its capital, is white and green as can be seen in the photo below taken atop Pueblito Paisa in Medellin. 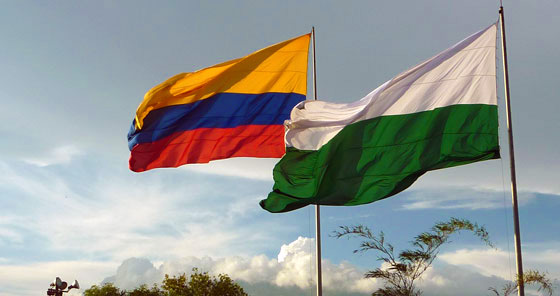 Return from Colombia Flag to Homepage