Transport in Medellin is generally quick and efficient. With the exception of major routes during rush hours moving around the city is pretty easy.

A source of great pride for many 'paisas' is Medellin's Metro system (the first and only one in Colombia, at least until Bogota builds its version.)

The Metro consists of two lines A and B:

-  Line A (the longer of the two) runs from north (at Niquia) to south (at Itagui), although work is currently being undertaken to extend the line to Sabaneta.

-  Line B runs from San Antonio (in Medellin city centre) to San Javier in the west. The two lines connect at San Antonio.

Due to the pride that the Paisas take in their Metro it is probably the cleanest and most well-respected mass transit system in South America. 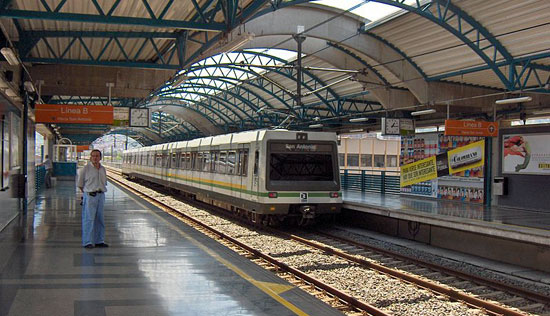 Taxis in Medellin are relatively cheap and are all metered. Hailing taxis on the street is generally very safe.

Buses run to all parts of Medellin. As with all the major cities in Colombia, working out the routes can be a bit confusing so ask for advice on which bus(es) to take rather than standing at the side of the street attempting to read the placards in the bus window as they rush past.

To and From Medellin:

Medellin has two bus terminals. Buses in the Northern terminal (situated at Caribe Metro station) go to all destinations in the north such as Cartagena (13 hours), Santa Marta (16 hours), but also Bogota to the south east (9 hours).

Medellin has two airports. Olaya Herrera Airport is located in the south of the city near the Southern bus terminal. Flights from this airport are domestic only.

The newer Jose Maria Cordoba Airport is situated near the town of Rio Negro about 50 minutes outside Medellin.

Return from Transport in Medellin to Homepage