Colombia Soccer League
Guide to the League and Teams

The 18 teams in Division A of the Colombia football league play each other once in each season as well as a special "derby fixture" where teams play an extra game against their traditional rivals to bring the total number of matches to 18.

Colombia's 3 biggest cities each have 2 traditional clubs. The capital city of Bogota is a bit of an anomaly in South American football. In every other South American nation teams from the largest city dominate the soccer scene, but a team from the Colombian capital has not won a title since 1988. Since the 1970s teams from both Medellin and Cali have had far more success than their counterparts in the capital.

In Medellin are Atletico Nacional (green and white striped shirts, white shorts) and Deportivo Independiente Medellin (red shirts, blue shorts). Atletico Nacional has the larger following and refer to themselves as El Rey de Copas (The King of Cups) while Independiente Medellin's nickname is El Poderoso (The Powerful) - perhaps an insight into the lack of modesty in this part of Colombia! Both teams play at the Atatasio Giradot Stadium. 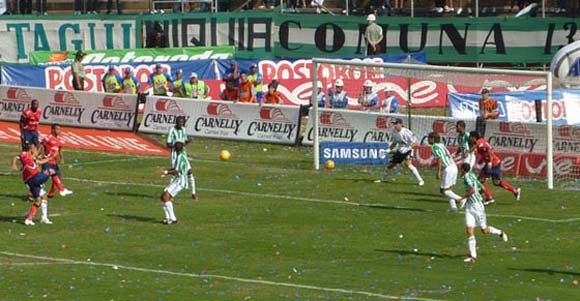