Pros and Cons of Colombia
A balanced view

The newspapers and news channels tell you Colombia is still a no-go zone.

Yet at the same time Colombia has begun to sneak onto numerous Top Ten destinations lists.

Is Colombia a warm, welcoming, untouched paradise? Or is it just a hotbed of kidnapping, drugs and murder (surely the media is not simply inventing all this violent conflict)??

So, what exactly is the truth?

A balanced view is what is required here. Should you come to Colombia? (In short, Yes!!). But here is an honest look at the pros and cons to help you decide for yourself...﻿

Latin Americans in general are a friendly bunch and you’re unlikely to have difficulty making new friends in any country from Argentina to Mexico (language problems not withstanding).

What distinguishes Colombia from the majority of its Latin American neighbours is the struggle it has undergone to attract visitors. I believe this results in an increased appreciation for those that do find their way to these lands.

The comments and questions you will undoubtedly receive form an interesting range. There are those that commend you on defying Colombia’s detractors to discover what they proudly state as ‘the most wonderful country in the world’, but there are also those who appear almost baffled that you would leave ‘an organized, wealthy, first-world country’ to live in these war-ravaged parts.

Colombians are an incredibly warm, friendly, kind people. They’ll go out of their way to help you and make you feel welcome in their country. Colombians are proud of their country, but it’s an inclusive sort of pride; a kind of “Here’s what we have, come and enjoy it!” 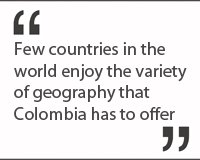 Without doubt one of the greatest assets that this country possesses and that will one day bring tourists flocking to this corner of the continent is the richness and variety of its landscapes, both natural and man-made.

From deserts to snow-capped mountains, vast plains to thick jungle, white-washed colonial villages to bustling metropolis, Colombia literally has it all. Few countries in the world, let alone in South America, enjoy the variety of geography that Colombia has to offer.

The only South American country bordered by two oceans, the Atlantic and the Pacific, also boasts the wettest region in the world (the jungle along the Pacific coast in the department of Chocó), as well as the world’s highest coastal mountain range in the form of the snow-capped Sierra Nevada de Santa Marta which runs close to the Caribbean coast. One of the most remarkable features of these landscapes is the dramatic and sudden changes from one to the next.

For several months I was involved in a project based in Quibdó, in the jungle department of Chocó. The first time I flew from Medellin (where I live) to Quibdó I was amazed at how suddenly the tall mountains of the western Andes range stopped and gave way to thick virgin jungle.

A couple of hours drive beyond the snow-capped mountains of the Santa Marta region is the largest desert area in Colombia. And there are countless other examples of these dramatic changes and micro-climates.

The majority of South American countries are comprised of a huge capital city, often located on the coast, and an under-developed hinterland. Colombia is very different.

Coastal cities such as Barranquilla (Atlantic coast) and Buenaventura (Pacific coast) are important Colombian ports, but the larger of the two, Barranquilla, only ranks as Colombia’s fourth biggest city. Colombia’s three largest urban centres are all located in the interior of the country.

The capital Bogota with its 8 million inhabitants spread across a wide savannah is a fascinating blend of the old and the new. The old colonial architecture of the central La Candelaria district contrasts with the modern apartment blocks and nightlife zones in the north of the city.

Colombia’s second most important city, Medellin, is nestled in the western range of the Andes and known for its perfect climate (it’s known as the city of eternal spring), it's slick and efficient Metro, its flower festival and its stunning Christmas lights.

And then there’s Cali, salsa capital of the world and home to what they claim are the most beautiful women in the world (and it’s hard to disagree, although Medellin provides stiff competition in that regard).

Colombia has a complicated and bloody history, much of which continues today. Parts of the country are still ravaged by the war between the guerilla (the FARC et al), the paramilitaries, and the government forces. People are lost every day to this conflict and kidnappings are still commonplace.

Colombia has of course long been synonymous with drugs, and although Pablo Escobar’s infamous Medellin cartel is long gone, the production and trafficking of cocaine continues unabated despite various measures and billions of dollars of US aid. These problems are all inextricably linked to each other further complicating the matter.

Anyone planning to spend time in this country should have at least some appreciation of the problems found here. The pertinent question then becomes “am I putting myself in danger by coming to Colombia?” In answering this question it’s important to start by saying that the situation changes frequently and you should endeavour to find up-to-date information.

Since the arrival of Alvaro Uribe to the presidency in 2002 Colombia has become much safer, at least for the tourists. Most backpackers are likely to enter Colombia from Ecuador at Ipiales in the south and cross into Venezuela in the north-east at Maicao (or vice versa).

The classic route is something like this (starting from the south): Ipiales – Popayan – San Agustin – Cali – Coffee region – Bogota – Villa de Leyva – Medellin – Cartagena – Santa Marta (including Parque Tayrona). There are of course lots of variations of this route, but this and pretty much all of the other permutations are very secure.

Many of the older guidebooks will tell you that travelling between Medellin and Cartagena, for example, is extremely risky at night. This was true as recently as 2002. Back then the government even arranged huge armed escorts for people to travel to the coast on holiday as independent travel was prohibitively dangerous. People will tell you that they barely left their cities it was so dangerous.

Now, roads are well policed and the only danger you really face is the kamikaze style of driving which exists across the whole continent!

One of the first places British citizens go for information about the safety of travel to Colombia is the Foreign and Commonwealth Office website. There may be small differences between the advice offered by different countries, but for the most part it is pretty similar. In the last year or two the FCO website seems to have become more representative of the current situation.

A popular backpacker pastime is to lambast the FCO website as ridiculous over-the-top nonsense. Taking into account that the FCO site and its equivalents are always going to err on the side of caution, it probably isn’t too far off the mark. Everything on the site must be taken in context. Yes, there have been bomb attacks in Bogota and Cali in recent years, but notice what the targets were; the Justice Palace, a police station. Indiscriminate bomb attacks against civilians are, at least in the typical tourist destinations, very very rare.

One important point to make is that if you have travel insurance (which is a decent idea here as in any country) you may very well find that you’re not covered should you stray outside of the areas deemed safe by the FCO or your own government’s travel advice. Be sure to check with your insurance company.

Some travelers eager for a bit of adventure ignore warnings, head way off the beaten track and end up in trouble. This is something that annoys Colombians. You’ll find that you’ll lose a lot of sympathy if you’re kidnapped while trekking through the heart of known guerilla territory. There are enough tragedies happening every day in this country without needlessly adding to them. Sure, there is a certain grey area, places that are considered safe-ish, but that have also occasionally seen violence. This is a judgment call, but there are some places to which travelling is downright daft. Many of the rural areas plagued by violence are also the most beautiful and there is always a temptation to take the risk. But every time a foreigner is kidnapped in this country news of it is splashed around by the world media and the damaging reputation lingers on.

There is certainly a problem in Colombia’s larger cities of delinquency. Street crime is still commonplace, but Colombia is no different in this regard to any of South America’s other countries. Take the usual precautions.

There is a culture of littering here and it can at times be quite saddening to see roadsides strewn with all sorts of rubbish. This infuriates an awful lot of Colombians too. Just be sure to set a good example yourself.

Punctuality (or rather a lack of) can be a bit of a nuisance at times too. Be prepared to take time and distance estimates with a huge lump of salt especially in more rural areas.

I can honestly say that with a little common sense and precautionary behaviour, there is no reason at all to fear Colombia. It is an incredible country that will one day be heaving with tourists from all over the world.

You hopefully now have a good idea of the pros and cons of Colombia.

I encourage you to forget any preconceptions you may have of Colombia and simply come and see for yourself!

Return from Pros and Cons of Colombia to Homepage