Christmas is a wonderful time to be in Colombia, particularly in the weeks leading up to Christmas day. As opposed to some western countries Christmas still retains a disticntly Christian feel with many attending midnight mass on December 24. 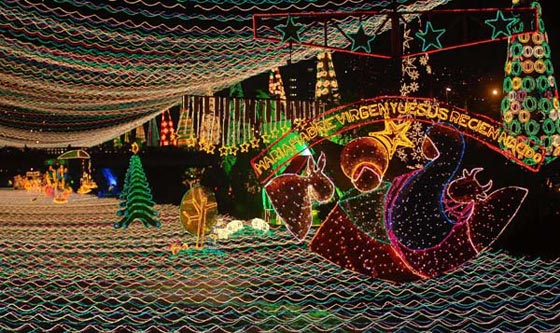 That's not to say that it's not a time for partying. Indeed one of the best things about spening Christmas in Colombia is the almost non-stop 'rumba'! Schools and universities close for up to 2 months over the Christmas period and the bars, discoteks and streets are full of revellers.

It always seems to me that the party atmosphere during Christmas in Colombia feels much more inclusive than it does in some other countries. Whenever I travelled back to my native Britain in December I'm struck by the exclusivity of the pre-Christmas celebrations. The emphasis seems to be on parties for specific groups (work dos etc).

It's partly due to the warm climate that Colombia enjoys: it's much easier to meet people when they're sitting outside on the street in shorts and a T-shirt firing up a barbeque than shuffling past people with scarves wrapped round their faces.

But perhaps more importantly Colombians are simply an outgoing, gregarious people and this is probably never truer than in December.

Here are some highlights to look out for during the festive season:

Come 1 December every town and city in Colombia will be decked out in colourful lights and decorations.

Before I came to live in Colombia my idea of Chistmas lights in my native Britain was standing in the freezing cold on a wet November evening watching a soppy ex-Big Brother contestant turn on some tatty-looking lights on one of the city's high streets, and wondering why I wasn't in a nice warm pub instead.

Medellin's Christmas lights, however, are a different kettle of pescados altogether. There are well-thought out, attractive displays located all over the city, but by far the most impressive are the lights suspended over the Medellin River.

For hundreds and hundreds of metres people walk along the banks of the river gazing at the simply stunning decorations suspended above the flow of water.

As well as the lights hung above the river, there are all many of Christmas lights, shows and attractions along the river bank.

These include water and light shows, and fountains that children (and adults) can run around in. 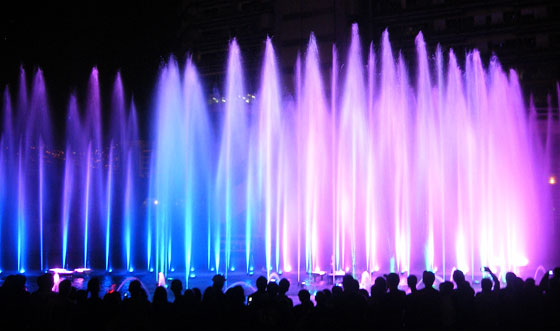 The lights usually last from the start of December to mid January. The busiest days tend to be at the beginning of December and on December 8 (El Dia de Las Velitas).

As the sun sets at around 6pm people emerge from their houses and businesses and head to the parks and plazas to light candles. The scene is wonderful; couples, groups of youngsters, grandparents and grandchildren all lighting row upon row of twinkling candles. 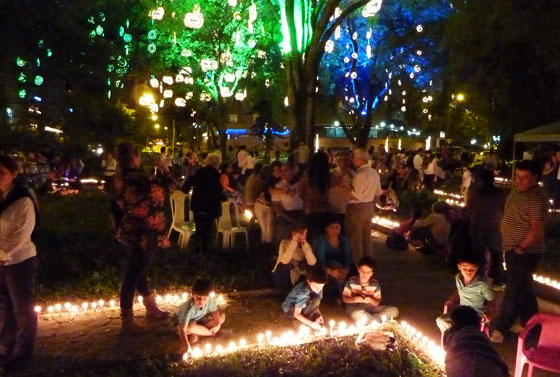 On Candle Night, parks and plazas are full of families lighting candles

The candle lightling tends to wind down around 10pm as the candles slowly burn out and the children head off to bed.

The extraordinary parade of myths and legends ('el desfile de mitos y legendas' in Spanish) takes place in the centre of Medellin every year on 7 December - Candle Night.

The parade begins at Pablo Tobon theatre and runs down La Playa street before turning left onto Aenida Oriental and finishing around the Alpujarra centre.

The parade begins at around 6:30pm, although to get a good spot you should arrive at least an hour beforehand. 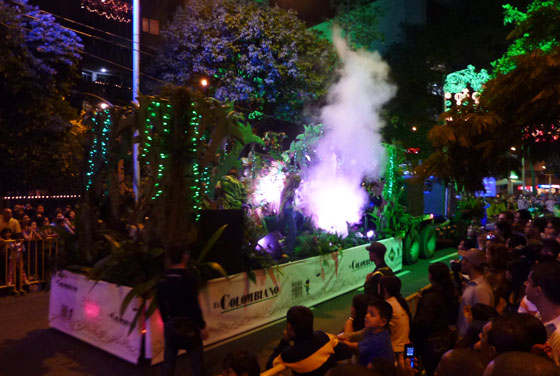 A float on the Myths and Legends Parade in Medellin

Typical food is one aspect of Christmas where Colombia falls a little short compared with my homeland of Britain.

The typical Christmas nosh consists of bunuelos (fried balls of cornflour and cheese) which, despite being classed as Christmas food, are eaten all year round, and natilla (a kind of gelatine sweet) which is definitely only eaten at Christmas and is reasonably tasty.

An important feature of Christmas in Colombia is the traditional music played throughout the festive season. Christmas music (usually referred to as 'musica de diciembre') is classed as musica parrandera, a traditional dancy kind of music.

Many of the sonsg' lyrics don't particularly relate to Christmas and I'm not sure how exactly it was decided that this would be Colombia's 'Christmas Music', but the songs are upbeat and fit in well with the party spirit.

Return from Christmas in Colombia to Homepage